An Objective Study of the Qanoon Instrument by Furat Qaddouri

The multitude of civilizations that the Arab world has witnessed greatly affected its music and diversified its rhythmical infrastructure & instruments, in all music genres from traditional to folk. The Qanoon, was and still is, at the forefront of this rich heritage of Arabic musical instruments.

Thus, the Flat Zither is considered to be a primary instrument both in the Oriental Takht (musical ensemble) and in solo paying. Further, it’s one of the most intricate musical instruments that emanates distinguished & diverse notes consisting of around three and a half octave covering the majority of Arabic maqam. That is why the Flat Zither is regarded as a requisite to other Arabic musical instruments and the center point of the orchestra, and when played in an orchestra or ensemble it sweeps up all the other instruments and leads them on, which is very similar to the importance of piano in the west, which is considered as an indispensable instruments in any orchestra.
The Qanoon is a trapezoidal string instrument, in which the performer plucks the strings with short horn-plectra placed between the tip of each index finger and a small metal ring. It is also worth pointing out that the Qanoon manufacturing originated from the Arab world.

If we were to trace the history of the Qanoon through different eras, we will find that this instrument is a descendant of the string instrument family that has evolved over time. There are different views as to the exact origin of this instrument, which varied due to different research sources used. It is also worth noting that Arabic musicologists and reference books lack concrete & accurate information due to the following: firstly, insufficient resources dedicated to the study of the Qanoon, secondly, failure to adopt ancient Arabic manuscripts, and last but not least, failure to rely on Arabic & Islamic historical musical relics, despite the fact that they are the primary resources for research concerning the history of music.
Professor Subhi Anwar Rashid is considered to be one of the most important researchers in the fields of the history of instrumental music & the science of musical relics, and his work is considered to be a major source of information for other researchers in the musical field.

In his books “Musical Instruments in Islamic Eras”, “History of Arabic Music”, and “Complementary Instruments to the Iraqi Maqam”, Dr. Rashid states that the Qanoon is originally an Assyrian string instrument, particularly from the 19th century BC. A box carved from an elephant’s ivory was found in the Assyrian capital Nimrud also known as Kaleh, which is approximately 35km away from Musol city. The strings are stretched over a single bridge poised one end, and attached to tuning pegs at the other end.

The Abbasids referred to this rectangular string instrument as “Nuzha”, which resembles the Assyrian instrument. In an undefined span of time, this instrument later on took the form of the current Qanoon. However, there is no concrete proof that the Qanoon was used in the Pre-Islam era or before the Abbasids.

“Nuzha” kept its rectangular shape and was still used side by side with the Qanoon in the east and west for a short period of time, until it disappeared gradually while the Qanoon dominated the musical scene.

In his book, “History of Arabic Music”, Dr. Rashid mentions that the Qanoon was one of the last musical instruments that the Europeans have adopted from the Orient during the middle Ages, around 1100 Ad, and continued being played until its importance slowly began to fade and was replaced by the piano around 1700 Ad. The Qanoon was also adopted in India, the former USSR and Asia.

With reference to the naming, Dr. Subhi stated in both books, “History of Arabic Music” and “Complementary Instruments to the Iraqi Maqam”, that the Greek word Kanon (Kavwv) is different from the “Qanoon” as a musical instrument, rather, the former refers to a one stringed instrument known as monochord, which is used to illustrate the mathematical properties of musical pitches. In fact, there is no proof that the Flat Zither was ever used during the Roman & Greek eras. Hence, the name “Qanoon” was used during the Abbasid era, specifically in the eleventh century, as it was mentioned in the famous folk tale “One Thousand and One Nights”.

The Manufacturing of the Qanoon
The Flat Zither is normally made from sycamore wood, the back of pine wood, and the bridge is made of maple. The design on the sides and top is cut out of rosewood and white pine, forming this trapezoidal shape.

The manufacturer of this instrument takes specific attention to the dimensions and the type of wood in use, as these elements affect the quality and beauty of sound generated. Egypt is primarily known for making the best Qanoons, and after it comes Syria. The Qanoon is made up of 78 strings, 26 courses of strings, with three strings per course. The strings are tuned to the basic notes of a given scale. The pitch of each course is lowered or raised by a whole step, half step, or quarter step by lowering or raising fixed metal levers that stop the strings at specific distances.

Tuning of the Qanoon by the plectra starts with the middle octave the “Husseini”, followed by the “Dukah” (Re), then the “Nawa Pentachord” stabilizing the “Rast” (Do), which is the fifth from the bottom of the “Nawa”, lastly by the “Jiharkah” (Fa), which is the fourth string on the top of the “Rast”, and finally the remaining strings are fine tuned in harmony with the middle octave.

Dr. Rashid maintains that the origin of these terminologies originated form the Mongolian Empire (1258 – 1337) right after the cessation of the Abbasid era. These Persian names were mentioned in Kutbeldine Al Shiraz’s book, who was born in 1236 in Shiraz/Iran, and died in 1310 in Tabriz. The Arabs then published these Persian terminologies and used them to refer to the musical Arabic scale in the Arab world.

Following is a detailed study of the parts of the Qanoon, the Qanoon manufacturing, and methods of playing the Qanoon using the left and the right hand.

Following is a detailed description of each part:

This trapezoidal sycamore wood is constructed by skilled craftsmen with an average length of (75-100cm) at its long side, (29.7cm) at the short side, and a width at (36.3cm) gradually tapering to (8.8cm) at the narrow end. The instrument also has special latches for each course called mandals. The Turkish and Egyptian Qanoons differ in size. 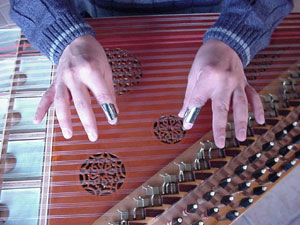 It is the lower surface that is placed on the performer’s lap.
The Arabic Qanoon - 100cm.
The Turkish Qanoon - 75cm. 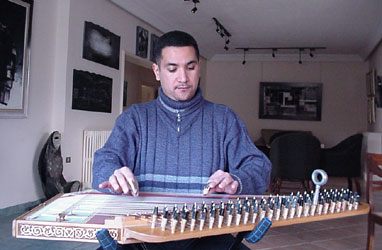 It is the horizontal board which is restrained between the heels & pegs.
The Arabic Qanoon - 30cm.
The Turkish Qanoon - 20cm. 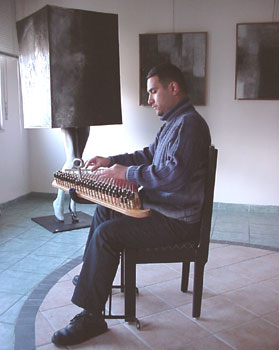 It is the connector between the upper & lower sound boards, which containes about 3.5 octaves.
The Arabic Qanoon - 44cm.
The Turkish Qanoon - 33cm 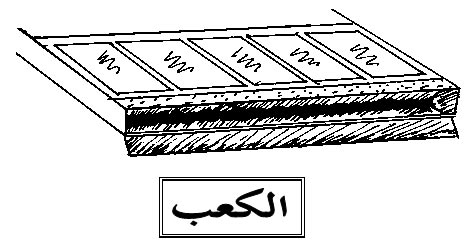 These small levers can be raised or lowered in order to adjust the pitches. 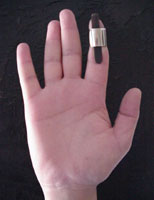 They are made of an alloy of iron, and there are 5 levers for each string. The performer raises it with his left hand while playing in order to adjust the pitches. 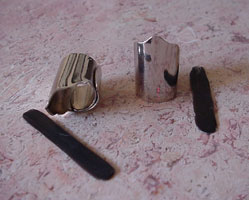 All the strings are attached to this part. 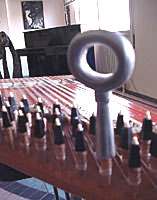 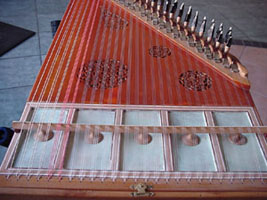 Wooden tuning pegs are used to change the tension on a string, hence, to set its pitch. The top edges of the pegs resemble truncated pyramids, and are turned by the cleft.

A metal key used to position the pegs and control the pitches.

Segments of fish skin covering small square spaces on the wood top, which gives the instrument its haunting, hollow resonance and surprising volume.

The Bridge is fixed in place by the tension of the strings passing over it. It can also be re-positioned according to the tuning requirements.. 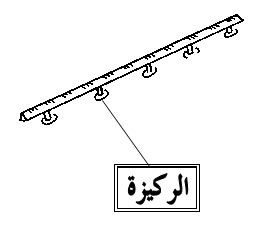 A small wooden piece made of wood and acts as the connector between the bridge & sound board. 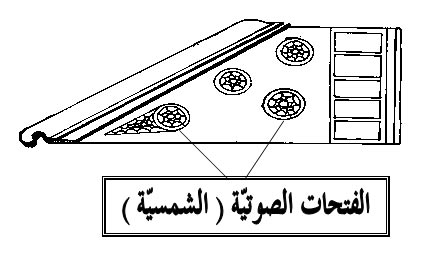 They are ornamented holes distributed over the surface, which gives emphasis to the sound coming out of the instrument.

This adjustable metal ring which is worn in the index finger is used in conjunction with the plectrum for plucking the strings. 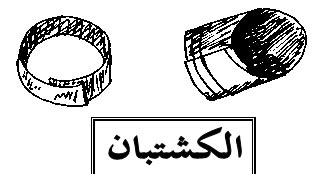 The performer holds the Qanoon horizontally on the lap, and then plucks all three strings for each note simultaneously using plectra one fastened to each index finger by an adjustable metal ring/ shell picks.
Care instructions: insert the plectrum in a cup full of olive oil after each performance. 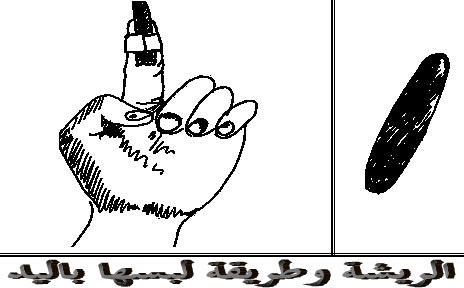 There are an average of 26 different notes (possibly up to 30 notes), and for each note there are two or three (mostly three) strings for a total of 78 strings. The total range is up to 3.5 octaves .The strings can be lengthened or shortened by raising or lowering the small latches placed under the strings. In this way, the instrument can produce gaps smaller than a semitone during play. The reason why the instrument has a trapezoid form is to be able to insert the strings correctly from short to long, and to produce different sounds from high to low. Every string that comes out of the straight angles section and runs over the bridge is covered by an accord peg, passing through a special cleft running the length of the edge.

There are three types of strings in terms of their coarseness which is commonly known to musicians as:
“Dukah” – for the dense strings
“Nawa” – for the medium strings
“Kurdan” – for the fine strings

The central of octave notes are made of 78 strings that form the 26 maqam, and are as such: 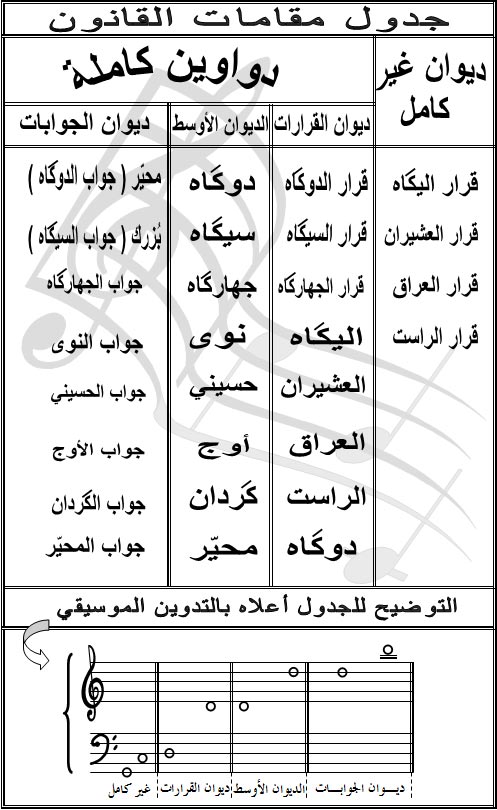 Strings are modulated in equal temperament according to the “Diwan/ Octave” fundamental scale from which the Rast maqam is composed. Tuning begins from the Husseini note which is central of octave notes, which is the 10th note in the main head at a frequency of 440Hz/sec. Performers modulate from one maqam to the other keeping the central note as their base.

The Fundamentals of Qanoon Practice


First: The position of the Qanoon

The Qanoon lies flat on a special holder equal in size, raised to a certain height that allows the musician to play comfortably while seated in the center.

Second: The position of the body

Methods of playing the Qanoon


The use of the left hand while playing the Qanoon

Playing the Qanoon is based on scientific and artistic principles that should be performed by both hands. Thus, it is very important to coordinate between the movements of both hands to ensure the right performance, in spite of the fact that the majority of people are innately right handed. While playing, the left hand represents the dramatic depth of the tunes that are played in the bass area or the beat that accompanies the performance.
Accordingly, it is of high importance to train the left hand to improve its performance and efficiency so both hands are equal in strength and input.

Before the invention of Levers
Prior to producing the metal levers, the fret board was primarily plucked by using the fingers. One of the most important Qanoonists was Mohamad Al Aqad, an Egyptian who manipulated the board by using all of his fingers to get the desired note. This requires extraordinary skillfulness and a sharp musical ear as playing is performed by using the left hand thumb laying flat. This method is rarely, if any, used nowadays. Today, transposing of the levers is done by using the left hand to attain new melodies, that is why the left hand is as important as the right hand.

Note
We can use both methods (The metal levers and the fingers) to get the desired notes quickly and skillfully, taking into account that plucking by using the fingers helps the player in conveying his emotions and feelings in his music. This is one major characteristic that distinguishes Arabic music.

Designed and Powered by ENANA.COM